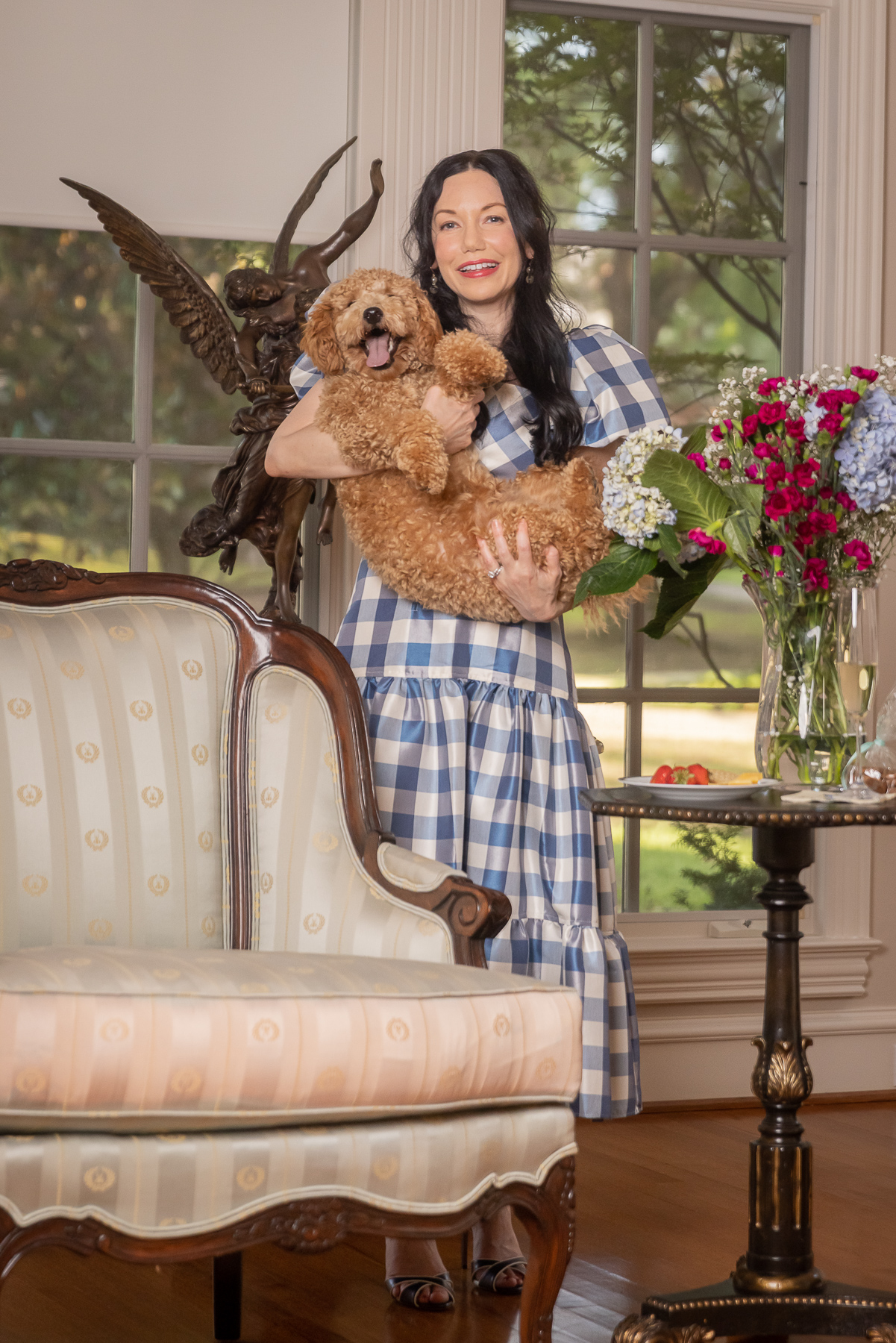 Happy Weekend! It’s been awhile since I shared a “life lately” post, but first we really need to talk about this Hunter Bell dress! I purchased it a few months ago, but didn’t get a chance to wear it for awhile, because it is just so much more hotter and humid here in Texas than what I’m used to coming from California. Hunter Bell is a women’s contemporary apparel brand that grounds feminine playfulness with an accessible approach to modern sophistication. The brand was founded in Manhattan in 2006, but in 2016 founder/designer Hunter Bell decided to move back to her Southern roots and relocated the brands headquarters to Houston, Texas. I’m so completely smitten with this gingham dress and I got so many compliments on it when I wore it to my first fashion event here in Dallas (paired with these shoes and this bag).
I’m already eyeing a few pieces from Hunter Bell’s latest collection including this dress, this vest and this cardigan. Sadly, this exact Hunter Bell dress I’m wearing here is no longer available, but I am loving this similar one in red, which is perfect for the upcoming holiday season! I’m also loving this more casual blue plaid dress, which is perfect for running errands, or having our neighbors over for drinks and puppy play dates. 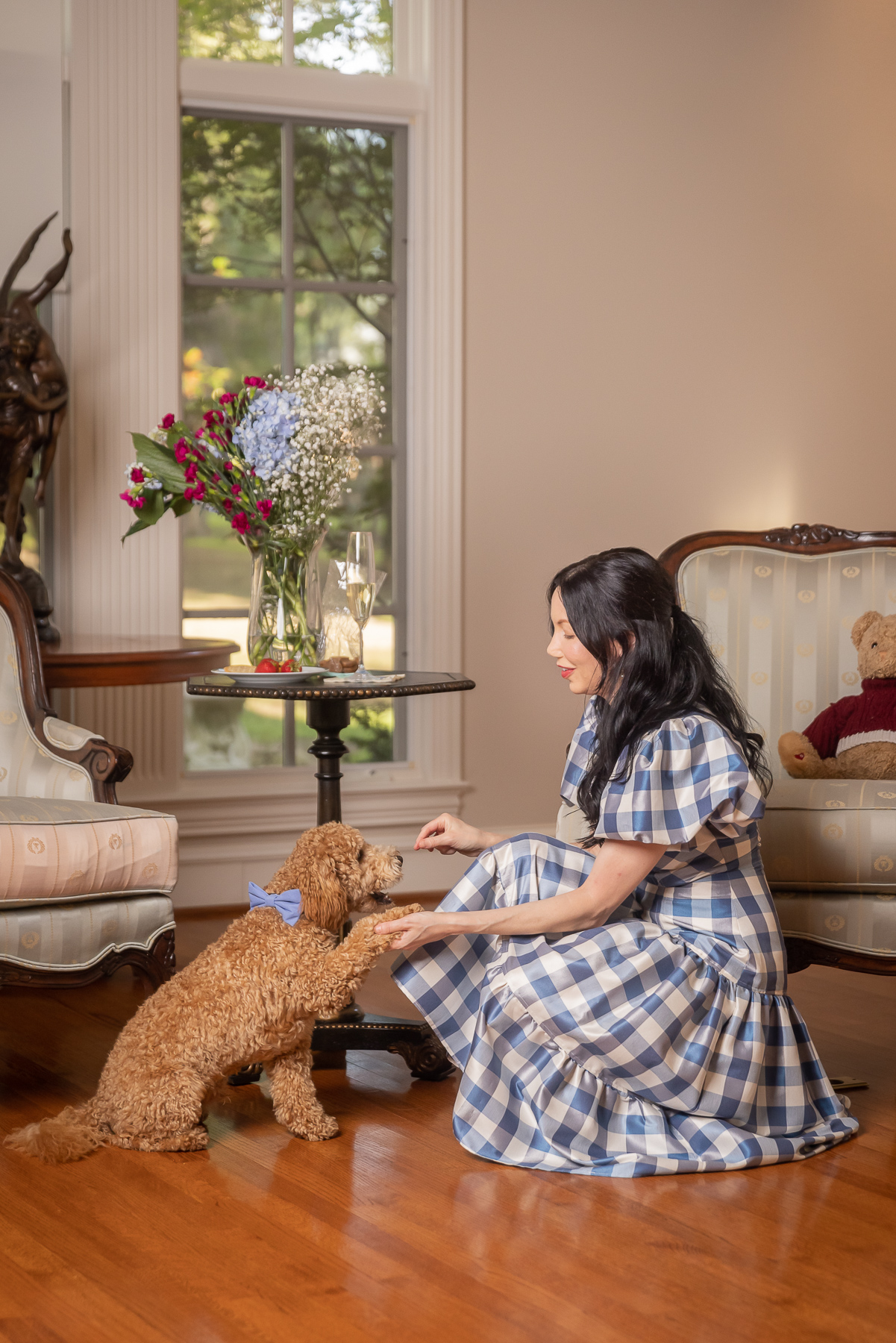 Charlie Cupcake is now 9 1/2 months old (and 18 1/2 pounds) and he is quite a handful! He is such a sweet, smart, loveable and friendly little pup, but he is also extremely stubborn. We just went “back to school” at What A Great Dog and is now in Manners 2 class, where we are working on focused leash walking. Charlie is getting pretty good at a few tricks like waving and shaking hands… but he’ll usually only do tricks if he gets a treat. 🙂 He’s also really good at using his paws and walking or hopping on his hind legs, which is very cute. He’s definitely going through a teenage phase right now… one moment he want’s to hang out with us, and the next moment he will head into the hallway for “Charlie time.” He still loves meeting people and other dogs and I am constantly setting up play dates for him. He was so excited when his best friend “Putter” came back into town… yes, Mr. Cupcake is one of those adorable little doods that likes to hug his furry friends. He’s always been such a confident little boy and when Mr. Pretty Little Shopper picks him up at day care, he likes to “say goodbye” to his friends before he leaves.
I got him a couple of Halloween costumes, so be sure to check back for photos… that is if the stubborn little dude will wear them long enough. 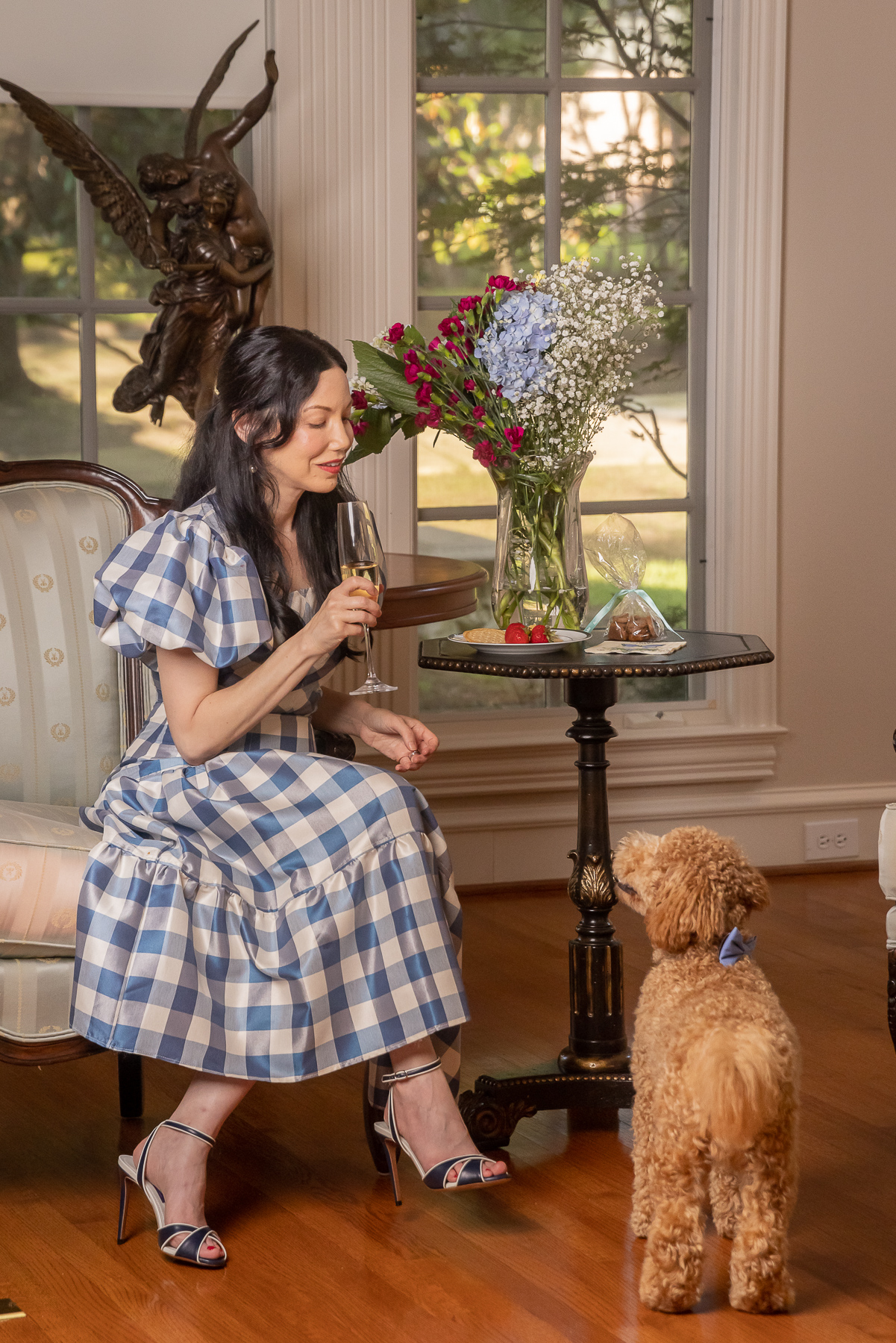 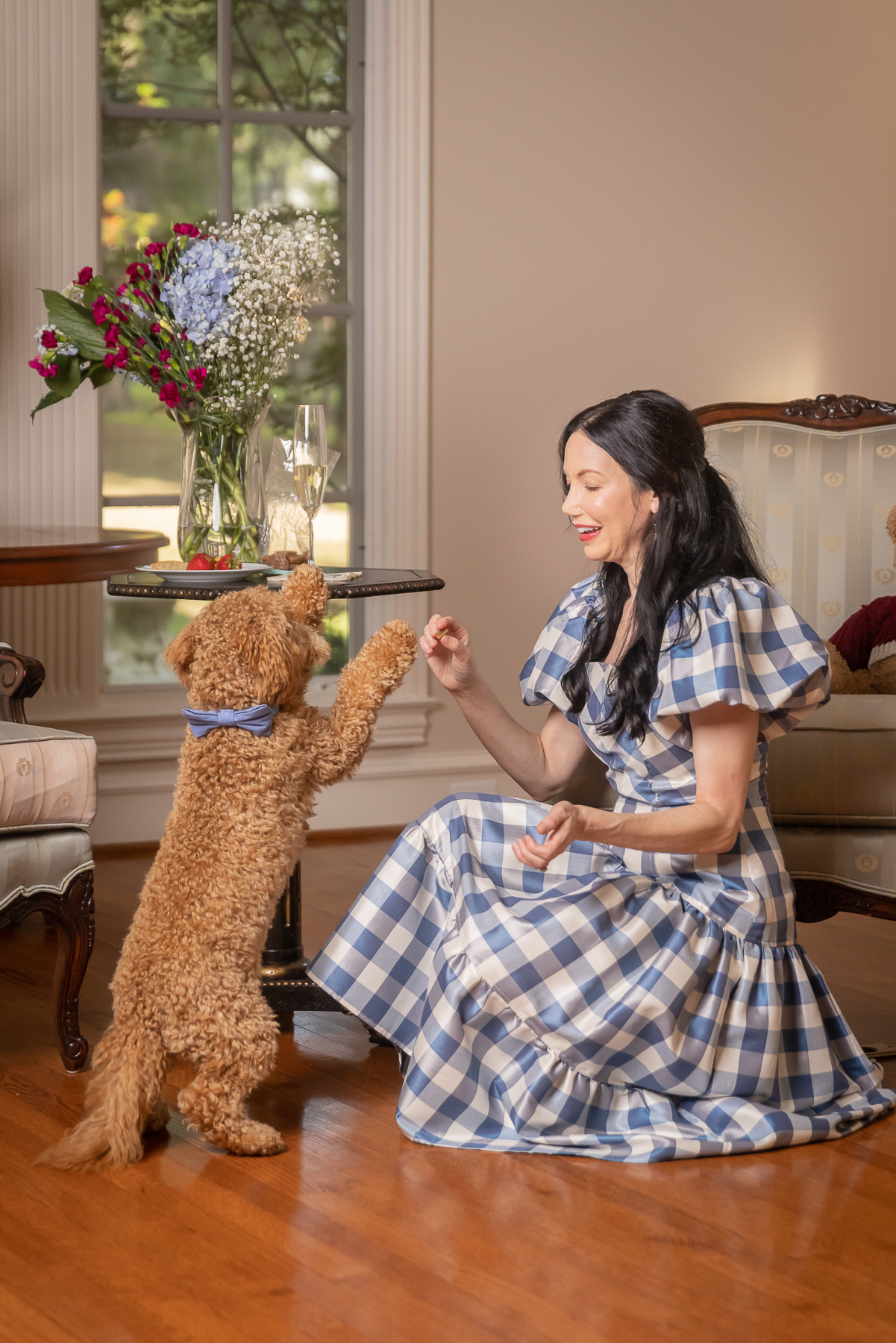 Our original plan was to hire an interior designer and get going on home remodels when we closed escrow on our Los Angeles home in April. Our new home is a French Country Cottage style and we will be designing it with a Hollywood Regency emphasis. As I started researching and reaching out to designers and contractors, I ended up deciding to take the reigns on the design end. I’ll be sharing more of the details behind this decision, as well as renderings, mood boards and taking you through the before and after photos and videos as we get started in March. In the meanwhile, I’m excited to share this sneak peek into my new living room and the mood boards for our powder room and guest bedroom makeover.

Auditions have been pretty slow the past couple of months, but they definitely started to pick up this week. I’ve been really working to improve my audition technique and taping skills and I can’t wait to set up a proper recording area when I finally redo my home office.
One thing I was sad about in moving to Texas, was not being able to complete the Improv and Sketch Writing Program at UCB. I decided to check their site on a whim and realized that their entire curriculum had been moved to online courses! I’m back in class and absolutely loving it. The Fash Life Series continues to make the rounds on the Film Festival scene. We were nominated for “Best Ensemble Cast” and “Best Branded Content” awards at the prestigious Seoul WebFest and we just took home the award for “Best Fashion Episode” at the London Fashion Film Festival! You can view the awards ceremony and a short video where I talk about creating the show here. So I definitely have been watching way too much TV (does it count as work if you’re a filmmaker?) and not reading nearly enough! I would highly recommend watching The Pursuit of Love, Hacks and Nine Perfect Strangers if you haven’t seen them yet. I’m also obsessed with a new show called Y: The Last Man and super intrigued by the newest Ryan Murphy serial American Crime Story: Impeachment. Sarah Paulson is absolutely brilliant as the infamous Linda Tripp and honestly, is there nothing Ryan Murphy can’t do? Like most of the world, we’re also watching the #1 Netflix show Squid Game. Think Huger Games, only more gruesome… the South Korean show just got picked up for a second season and could be Netflix’s biggest show ever!
One of my biggest goals this month is to set aside a bit of time each day to sit down and read a book. Since Mr. Cupcake came into my life it’s been quite a challenge. He still needs constant attention and by the time he settles down for a nap, I typically need one too.

I just got The Archetype Died by Dana James and have been flipping through design books including Beautiful by Mark Sikes and In the Pink by Dorothy Draper.
I’m also trying to get into the habit of planning outings that don’t involve errands. On my horizon for the next couple of weeks are the Kips Bay Dallas Decorator Show House and the Dallas International Film Festival. I’m hoping to get more in store shopping done too, now that holiday season is upon us. Charlie Cupcake and I went on a lunch date with a friend to The Mermaid Bar at Neiman Marcus and I was thrilled that they let you bring your dog inside the restaurant to dine with you! It was my first meal indoors in months and it was so luxurious to sit in an air conditioned room as opposed to a hot and humid patio! Remember all of those shoots I used to do with Mr. Bear… I’ve been slowly easing Mr. Cupcake into the idea that he’s not a chew toy. 🙂 What have you been up to lately? Leave me a comment below and let me know. Photos by Thomas Garza.
Thank you so much for reading!
xoxo,
Lisa
Let’s be social!